The ephemera of Christmas can bring back memories and nostalgia of childhood. The traditional ornaments, stockings and dishware used on this very American holiday remind us of our personal and familial stories. Recently stumbling across a slew of vintage Christmas cards, sent from across the nation to a particular woman in Portland, Oregon, I realized that these once personal ephemera now function as a collection of cultural memories. Below, I take a look at a specific holiday card and trace the history that makes these cards particularly significant and interesting. Enjoy! (See also: Cannon Beach, Space Age Santa and the U.S.S. Mt. Baker). 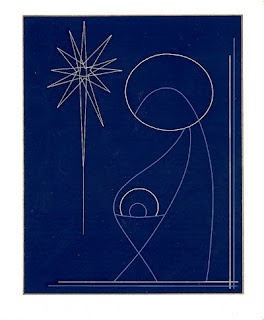 The names of Howard Vollum and Jack Murdock, founders of Oregon’s homegrown Tektronix Corporation, are typed as signatures under the holiday greeting in the card pictured above. With its modern rendition of the Virgin Mary and Child, with a subtle matte finish on fine white paper, this card dates to the 1950s or 60s, the heyday of Tektronix.

Today, the names Vollum and Murdock maintain significance in Portland because of the two men's philanthropic commitments to education and science. In addition to endowing an institute for advanced biomedical research at OHSU, Howard and Jean Vollum also funded a variety of buildings and projects in Oregon, including: the Mount Angel Abbey Library, Oregon College of Art and Craft campus buildings, the Native American Center at Portland State University, the Ecotrust building (the Jead Vollum Natural Capital Center), Vollum Lecture Hall at Reed College, and Opal Creek Wilderness. In 1975, several years after the death of Jack Murdock, the M.J. Murdock Charitable Trust was founded to support charitable organizations, the sciences and higher education. The Trust has awarded hundreds of millions of dollars through thousands of grants and continues to provide grant opportunities. 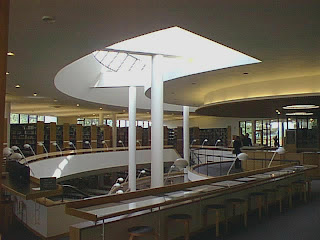 The story of Tektronix is an important story in the history of Portland and Oregon (check out OPB’s Oregon Experience: The Spirit of Trek to learn more). Tektronix began just after WWII when Murdock, with a passion of electronics and radio, and Vollum, who graduated as a physics major from Reed College in 1936 and had worked building radios and transistors for the State and U.S. Forest Service, opened up their first shop at 7th and SE Hawthorne in 1947. The small factory specialized in oscilloscopes, electronic testing equipment that visually portrays electrical phenomena on a screen. Oscilloscopes would become essential in a variety of fields, including the television industry and the U.S. space program, and contributed to the development of high-level electronics.

Image from Tektronix, Inc., from OPB's Oregon Experience: The Spirit of Tek.

As Tektronix grew exponentially in production and size in the 1950s (it was the biggest single-company employer in Oregon), the company become know for its innovative managerial practices. Chief engineer Vollum and General Manager Murdock established an employee driven model where creativity, new ideas and camaraderie were encouraged. In addition to the family-like vibe of the company, employees also benefited when Tektronix benefited. The management established an early profit-share program that contributed to the team spirit.

In 1971, Murdock died in a place crash, and in 1972 Vollum retired as president of the company (he passed away in 1986). The 1980s witnessed a “brain drain” of the company as seasoned employees left to open their own companies. By this time, Intel was well established in Oregon. Tektronix remains as a company today, but its legacy is even larger, as it was the fore-runner of the “silicon forest,” and played an important role in radio, television, and the space industry-important pieces of American history.

The card will be donated to the Tektronix Museum, which aims "to commemorate the Founding, Hyper Growth, and Market Share Dominance 'eras' of Tektronix, Inc."