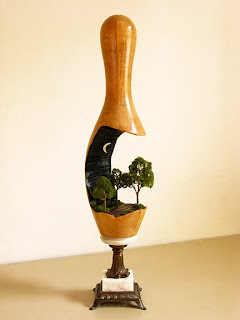 You may have seen Ron's work last June at the Mixed Media IV fundraiser for PDX Pop Now! at Grand Central Bowl. A variety of artists custom designed bowling pins, which were then auctioned off to raise funds. Rather than decorating the surface of the bowling pin or making a play on the pin's shape, Ulicny used the project as a springboard to bring to life a vision of an other-worldly miniature universe within the bowling pin.

With everyday objects and miscellaneous hardware, and hours (days) of solo concentration (isolation) in the studio, Ulicny conjures what he calls "viscurrealistic fabrications," conglomerations of disparate pieces assembled with precision and care to create a sculptural unity. 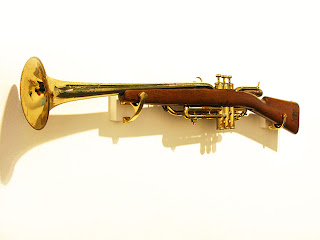 Ulicny's work is seamless. The sculptural juxtapositions appear so natural, it seems that these works are objects that come from the history of a parallel world that is just a little different than our own. Their meaning feels at the tip of one's tongue, yet it is the mystery of not quite being able to understand, of not quite getting the pun, that engages and engrosses the viewer.

Speaking of mystery, Ron has revealed little of the new work, providing only close-up teaser images (he says you'll have to go to the show to see the work, or wait until it's up on his website): 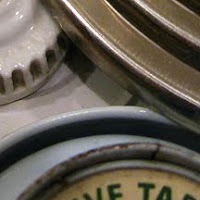 
(There are many examples of Ron's previous work, available for the viewing for all, on his website.) But, here's another, especially-for-you, sneak preview of another new piece: 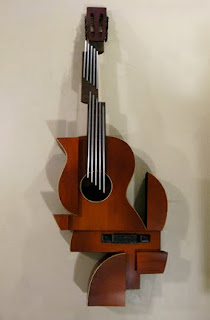 A new piece for the Spoke Art show. Image courtesy of Ron Ulicny.

Ron Ulicny's solo show, of 'new work', runs from March 1st through March 22nd at Spoke Art, 816 Sutter Street, San Francisco (open Wednesday through Sunday). The opening reception is Thursday, March 1st, 6-10pm. If you can't make it to San Fran, Ron will also have a show in the late summer this year at Guardino Gallery on Alberta St.